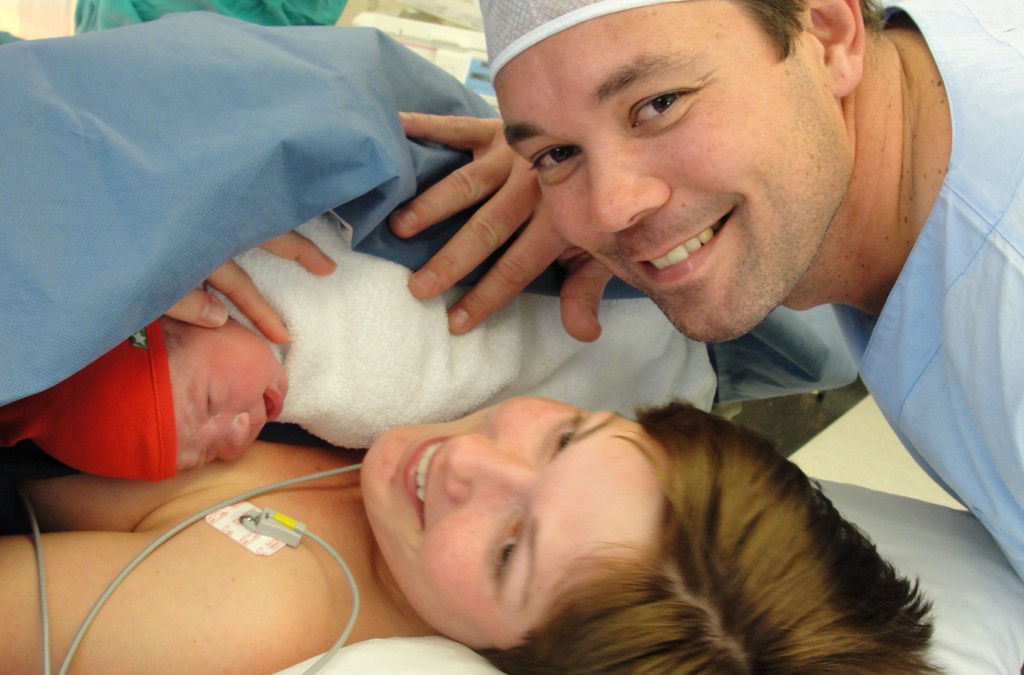 In May 2010 I went off the Pill.  I had been on it for a very long time so I wasn’t sure how long it would take us to conceive.  My periods were so irregular that I had no idea when I was ovulating.  I bought a pack of ovulation sticks but all that did was make me anal, so I threw them away.  Literally a week after tossing them (in September 2010) we conceived a baby.  I had no idea I was even pregnant because I had had pregnancy symptoms since I had stopped the pill:  exhaustion, bloating, sore boobs, etc.  I was extremely shattered in October though.  One afternoon I was on the bike at gym and could barely keep my eyes open.  I was chatting to my sister on BBM (yes the olden days) and she told me to take urine test.  I walked out the gym and went to clicks to buy one, then went back into the gym and pee’d on the stick and it was positive.  I couldn’t quite believe it at the time.  Blood tests confirmed it and we were ecstatic.

I thought I was off the hook as I was 5 weeks pregnant and didn’t have any nausea.  Mistake number one right from the beginning: NEVER ASSUME ANYTHING…as you go on to learn on a much larger scale after you have had the baby.  As soon as I hit 6 weeks, the nausea set in and it was bad.  I was felt like I was on the verge of puking all day, everyday.  The only time I didn’t feel sick is when I was sleeping.  Everyday I would get up and drive to work and pine for bed time.  I remember thinking then that I wouldn’t be doing this again in a hurry.  I landed myself in hospital twice on a drip.  My body was taking strain.  At 11 weeks the nausea vanished into thin air.

Then one day, when I was just about 12 weeks pregnant,  I woke up and felt a bit green.  It wasn’t the same type of feeling as the morning sickness, but it was a sick feeling in the top of my stomach.  During the day it got progressively worse and it progressed into cramps.  I called my gynae and she told me there was a tummy bug going around and gave me the names of the medication I could get for it.  I told my boss I had to go home and lie down.  By that stage I could not even stand up properly, so at about 3pm I drove home.  Riaan told me to buy Buscopan but by that stage the cramps were so bad I could not imagine getting out the car to go to the pharmacy, so I went straight home.  I asked him to get some and I got into bed.  The cramps just got worse.  It was like wave of pain moving around my abdomen.  If it had been a tummy bug, by this stage I would have been plastered to the toilet surely.

Riaan got home with the Buscopan and I took one.  At 6pm I felt worse and I knew something was just not right, so I asked him to take me to the hospital.  When we got there they gave me what they could for the pain and did all sorts of blood tests, internal tests, scans, etc.  They did a scan to see that the baby was fine and he was.  He was bouncing around in my tummy.  At this stage we did not know it was a boy, but I was sure I saw ‘it’ on that scan. I quietly knew that day that it was a little boy, but waited for the 16 week scan to confirm it.  Waiting for the blood results felt like years.  When they came back it showed escalated white blood cells which meant infection.  The surgeon eventually arrived and did a pressure test on my abdomen.  When he pressed on the right hand side I wanted to hit the roof due to the pain.  He told me that it was definitely my appendix and that he had to operate immediately.  And hour later, at 9pm I was taken into surgery.  I had the most amazing sense of calmness.  I was not worried or stressed and I prayed.  I knew that God was watching over me and my unborn baby.  Surgery went well but I felt like absolute crap when I woke up.  The surgeon told me that they got it just in time as it was about to burst.   All I wanted to do was drink some water but they said I couldn’t.  They took me to my room and they gave me an ice block to suck.  I have a tendency of getting low blood pressure especially after surgery. The nurses told me I was not allowed water for 24 hours and I wanted to kill them.  The pain was bad but bearable.  I have been through worse.  Getting up was not the greatest feeling however, but I managed.  They could not give me very strong painkillers because of pregnancy, I accepted it and recovered fast and well. 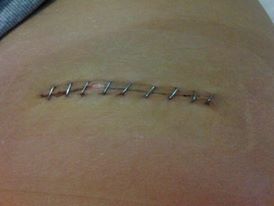 My 2nd trimester was a whole lot better than the first.  Nausea was gone, I could exercise properly again and I didn’t feel like something had taken over my body anymore.  The hormones however were INSANE!  Wowee, I would not have wanted to be around me.  I had genuine rage!  The emotions were hard to fight and I ended up in tears a lot of the time.  I had a few stressful events happen that I will not go into but I did not cope well with them at all.   I had quite a lot of pain in my ligaments between my ribs. But man oh man, when I felt those first movements….I have no words for that.  I was so emotional and realised it was all so worthwhile.  As time when on, I loved it when he moved and kicked.  Such special moments that I will cherish forever.

My third trimester was uncomfortable.  No other way to explain it.  The baby was packed tightly in there and just when you think your skin can’t possibly stretch anymore, it does and you feel like you are going to burst at the seams.  The gynae had told me that we were expecting a very big boy.  I was so torn between whether or not to have natural or a c-section.  I was scared of natural but didn’t want to ‘choose’ his birthday.  So we booked a c-section and I said that if I go into labour earlier, I will then try natural.

6 weeks before due date I started getting cramps and I went to the gynae.  She told me that my cervix was showing signs of getting ready for labour so she put me onto progesterone tablets and told me to take it easy.

2 weeks before our boy was due I was sitting on the couch and told Riaan that I was now completely and utterly over it!  That night I had my ‘show’ and I just knew that it was close.  At 3am  I woke up and ran to the toilet just in time for my water to break.  It is not like in the movies where it all just gushes out.  I called the hospital and they told me to wait 30 minutes and if more water comes out I must go in.  Well it wasn’t even 10 minutes later and more water did come so we got ready to go to the hospital.  Every few minutes water kept coming.  I hadn’t felt any contractions but when I got to the hospital and was settled, the nurse told me that my contractions were 3 minutes apart.  That is when I started feeling them!!!!!  I had not dialated at all.  She did and internal and told me that my pelvis was too small and that baby wasn’t going anywhere.  She also looked at my paperwork and said that due to the anal fissure that I had had, she would not have suggested natural birth because it could have ruptured.  NO THANK-YOU.  I was to have a c-section.  Because it was a Sunday morning, there was only one gynae on call and he was in an emergency so I had to wait until 08h00 for my c-section.  They could not give me anything for the pain because I was going to have a spinal block.  By 05h00 my contractions were 1 minute apart and getting more intense.  I wanted to kill someone.  I kept asking Riaan to call the doctor immediately.  I have never felt anything like it.  Deep and strong all the way down your spine.  They eventually took me into theatre at 08h30.  They had to wait for a contraction to end before giving me the spinal block.  That hurt like hell.

Then everything went peaceful.  The pain was gone and I was happy.  I could still feel my lower legs and asked how long it would be before they started cutting.  Riaan then said that they were already halfway into my uterus.  It was all so quick, but when they lifted that baby boy up for me to see I was completely and utterly flawed and gobsmacked.  That was hands down, the most amazing moment of my life.  I was overwhelmed with emotion and I could not believe how damn cute he was and that he was mine. 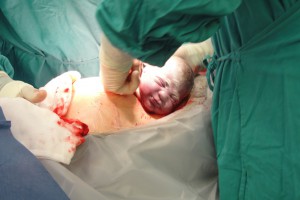 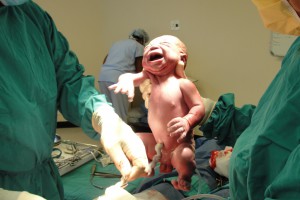 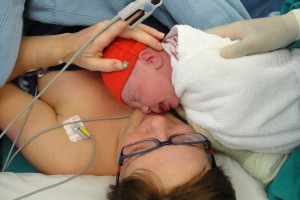 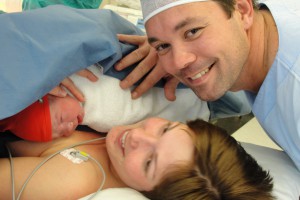 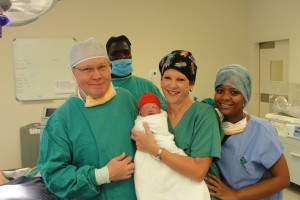 We had two names as options and as soon as he came out we knew which one suited him best.  Quinn Nicholas Petzer.  Born at 08h30 on Sunday 12 June 2011.

Every single discomfort, pain and hard time during the pregnancy was completely erased.  I was (and still am) totally in love with our sweet little boy.  He latched well from the beginning and my aim was to breast feed for at least 6 months.

At 4pm that day, the nurses told me to stand up and go to the toilet.  I told them I wanted to shower.  They told me that I must just to the toilet.  I insisted on showering.  When I stood up all the blood rushed to my head and the pain to my pelvis.  I understood then that there was no way in hell I was going to shower.  OUCH!  I was in a lot of pain but I refused for them to give me more Pethadine because it made me feel terrible, and I couldn’t hold my baby and care for him properly when I felt like that.

We took our brand new baby boy home (which was rather overwhelming that first day) and started our new life as a family.

God had given us the most amazing gift.  I was in awe and totally blown away by how He had blessed me with this new little life, and a very special one at that.  I could not understand how people cannot believe in God especially after the miracle of child birth.

And at that moment, I had no idea just how much this tiny baby was going to change my life… 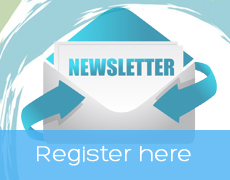 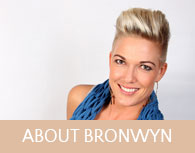 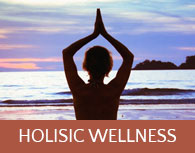